Is this a Confined Space? The wrong answer can be deadly… 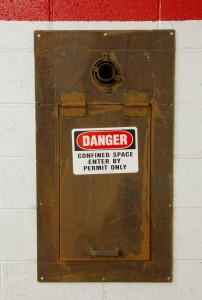 Based on the headline, one might assume this story is about exposure to a toxic gas entering a general work area and the resulting impact of exposure.  However, careful reading of the story implicates not exposure to toxic gas as the cause of death, but really the lack of a confined space program that adequately educates workers and anticipates & controls the risk.  This lack of a program ultimately lead to the death of all seven workers and injury to others that easily could have been prevented.

Please read the remainder of the article dated March 18, 2014:

“Seven workers have died on the spot after inhaling toxic fumes at an effluent treatment plant at a cotton dyeing unit at Perundurai Growth Centre, an industrial estate about 20 km from Erode.
According to T Mathialagan, District Officer – Fire and Safety, the accident occurred at KPR Mill’s effluent treatment plant that processes wastewater from the dyeing unit.
An electrician working on a water pump in a sunken pit was first overcome by poisonous fumes when a valve broke, releasing waste and fumes from an adjacent tank. A fitter and five other workers also suffocated to death after they climbed into the pit one by one to pull out the earlier victims.
Eleven of the factory workers who rushed to the spot were taken ill and hospitalised, he said. The police have filed an FIR and initiated action against the company. “

A couple of pieces of information are especially notable in the news article and warrant further discussion, to wit, “An electrician working on a water pump in a sunken pit” (Additional reporting indicated it was a “motor room”). By almost any definition this space would qualify as a confined space as it certainly would not be an area designed for continuous occupancy and would have a potential hazard (such as toxic gas from the treatment plant). Gases from water treatment or sewer systems such as Hydrogen Sulfide (H2S) are known hazards. H2S is deadly at relatively low concentration (100 ppm).

Even more tragically, “A fitter and five other workers also suffocated to death after they climbed into the pit one by one to pull out the earlier victims”. Unfortunately, this is a too common situation. In the USA, it has been estimated that more than 50 percent of those who suffer confined space related fatalities are the would-be rescuers.  This is an astounding number in a country with relatively strict enforcement of regulations related to confined spaces.  Even when workers have received appropriate training and acquired the necessary knowledge, they sometimes cannot resist the urge to try and assist a colleague in trouble; and those without proper training and knowledge are certainly doomed to react in an entirely predictable, yet potentially dangerous manner.  In all cases, if there is the potential for hazards to develop during entry operations, the factory must have viable rescue capability at the ready.

In this case, it was obvious that factory workers did not anticipate the risk, properly assess the risk, properly monitor the situation, or have a rescue plan; all components of a well-formed confined space program. Equipment such as toxic gas meters are widely available and can notify workers (by an alarm) of eminent danger. Most importantly, in this case, would be having appropriate plans for entering the space safely and having a rescue plan should anything go wrong.

Fortunately, these types of accidents are entirely preventable. So what is the solution?